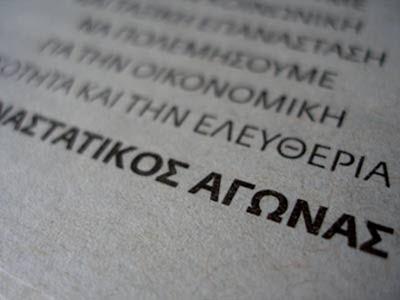 On Saturday night, police arrested at least six persons in house raids across Athens. All six are accused of participating in a “terrorist organisation”.  At least some of the arrestees are anarchists (details about the arrests are still blurred) and people have occupied the Athens Polytechnic in response. The statement issued by the occupied Polytechnic reads:


Today, Saturday 10/04/10 police openly arrested  6 persons with the charge of participation to a terrorist organisation. At a time of “financial crisis”, while the government attempts to cover up its mess with support packages by the European leaders, it promotes through mass media the so-called quelling of “domestic terrorism” as part of its attempt to contain the generalised popular discontent.
On the night of Saturday, April 10th we occupied the Polytechnic and on Sunday the 11th we call for an open assembly at 8pm in the Gini auditorium, under the topic of state repression and terrorising-lust promoted by the tactics of the immune, neo-dictatorial police…
THE TERRORISM OF STATE AND MASS MEDIA SHALL NOT PASS
POLYTECHNIC OCCUPATION

Updates on the case